T he most ardent collectors of Richard Parkes Bonington’s paintings in the nearly two centuries that followed his premature death in 1828 were the 4th Marquess of Hertford, whose stunning collection of oils and watercolors is the pride of the Wallace Collection in London, and two American anglophiles in the twentieth century, Paul Mellon and Richard L. Feigen. Both studied English literature at Yale, and both simply delighted in the art of painterly painters. I had the privilege of working with the former and befriending the latter.

When Paul Mellon’s Yale Center for British Art opened in 1977, this singular philanthropist had already acquired nine of its Bonington oils, which constitute the largest representation of that artist’s attainment in a public institution outside of the United Kingdom. Prior to that date Richard Feigen had acquired only a small Bonington wash drawing of a shipping scene in 1976. He was, by then, a much-respected connoisseur of old master and modern art. Nonetheless, as a Yale curator with a strong interest in this much underrated and understudied paragon of romanticism, I was somewhat surprised when Richard outbid Paul Mellon at a Sotheby’s auction in 1980 for one of Bonington’s most poetic paintings. Lerici on the Ligurian coast, where, according to the artist’s traveling companion Charles Rivet, “they bathed on a pretty beach...and slept in the room that Lord Byron occupied for three months with the Countess Gamba,” was a commission quite likely from Sir Thomas Lawrence and one of the last paintings to issue sublimely from Bonington’s brush (lot 36).

In the ensuing decades, Richard endeavored to obtain the finest works by Bonington to appear on the market. We often discussed the merits of each object, but it was his own refined taste and sense of quality that enabled him to gather as many splendid pictures as the walls of his drawing room on Fifth Avenue would accommodate. Whether it was a Normandy landscape illuminated by a sunset inspired by J M W Turner, or several of the more ravishing oil sketches painted on site in Italy during Bonington’s three month expedition in 1826, the significance of each acquisition within the entire oeuvre of the artist was undeniable. A dazzling display of bravura is the Palazzi Manolesso-Ferro, Contarini-Fasan and Contarini, Venice (lot 38). A brilliant midday light bleaches the marble facades to soft pastel harmonies as it chisels the ornate and intricate carvings of “Desdemona’s Palace” into bold picturesque relief.

The one genre of Bonington’s varied output that Richard was unable to secure was an oil of an historical or literary subject, of which the artist painted precious few examples in the last two years of his life. He came close in 1988 when Sotheby’s offered for sale Bonington’s Delacroix-inspired A Seated Turk, another jewel from the collection of Sir Thomas Lawrence. But when he learned that Yale was most eager to fill the same lacuna in its holdings, he graciously stepped down. I know he always regretted that loss in much the same way as had the Marquess of Hertford when he missed his chance to acquire it in 1856.

Richard compensated for this omission by assembling a group of Bonington’s narrative watercolors, of which the two anecdotes of French monarchal history, La Prière (Henri IV and Marie de Medici) and The Prayer (Anne of Austria and Louis XIV), are exemplars (lots 42 and 40).

Such distinctly innovative manipulation of the watercolor medium inspired an emulative phenomenon, called Boningtonisme, that would elevate watercolor painting in France to the status of high art.

What his friend and studio confrere Eugène Delacroix said of Bonington’s paintings might be applied to most of those that Richard Feigen owned. No one in this modern school, and perhaps even before, has possessed that lightness of touch which, especially in watercolors, made his works a type of diamond that flattered and ravished the eye, independent of any subject.

This from the French master whose lifelong conviction was also that the first merit of a painting was to be a “feast for the eye.” 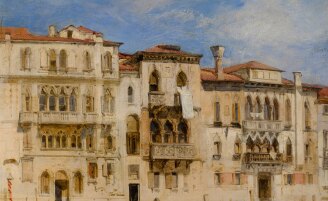 Receive the best from Sotheby’s delivered to your inbox.